You Can Freeze Aloe Vera

Questions like whether you can freeze aloe vera, come to me from time to time, via my website. It would be convenient, and some people do freeze their aloe vera, but my first experiences were not so pleasant, so I rather discouraged it. However, after another such question recently, I decided that I need to research this more carefully and make sure I have all the facts straight.

When I tried it, I had just put some broken aloe vera leaves into a plastic tub, closed it and put them into the freezer. But when I checked them later they had just turned into a goopy mess that did not look at all appetizing - or even safe to eat.

When I did a more thorough seach online, I discovered that those who promote the freezing of aloe vera have some special methods to prepare it first. You can freeze aloe vera, but first of all, they scrape the clear gel part out of the green skin part, and freeze only the gel. That can make a huge difference, as the skin part will decompose, and affect the gel, doing it my old way.

Some also put the gel through a blender and even add lemon juice, or vitamin E and C as preservatives. (They don't say how long it preserves). Some even add herbs like Tea Tree oil, Rosemary, Lavander, but then they warn NOT to take that aloe vera internally. You would apply that to your skin only.

Notice, that if you liquify this aloe vera mix in a blender, the air will get into it and make it foamy. So it is wise to let it stand a while so the air will evaporate out before you freeze it.

You Can Freeze Aloe Vera in Ice Cube Trays 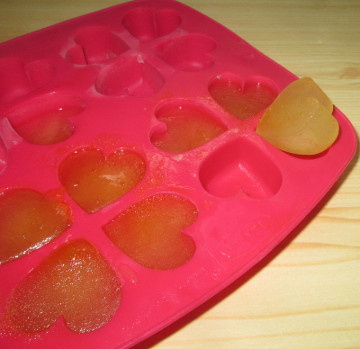 Another trick I discovered is that you can freeze aloe vera gel into ice cube trays. It was especially recommended for sunburn, as it would be cooling as well as soothing on the injured skin. I decided to try it immediately and scraped the gel out of some broken aloe vera leaves, and put them into a small silicone ice cube tray with heart shapes. I happen to have a canker store on my lower lip that bothered me the last few days. I remembered these frozen aloe vera heart shapes, and applied one (which rests on a clean wash cloth between applications).

The frozenness was almost a shock to my poor lip, so I only applied it a few seconds at a time and let it rest. Last week I was breaking off small pieces of a live aloe vera leaf and opening it up with a thumbnail, I spread it inside my lip and closed my mouth to hold in place. Oh how soothing it felt! After some time the aloe vera was all absorbed into my lip and cankersore, and I had only to spit out the green skin bits.

At this point I can say that frozen aloe vera in hard shapes may not be the best answer in all situations. But you can find out by trial and error.

If you get a large aloe vera leaf, removed from the original plant, I would recommend scraping the gel out of the leaf with a spoon. Put the gel into a container with a tight-fitting lid, and put it in the fridge as long as you are going to be taking frequent applications from it for a current physical need. That is, using it several times a day. It will last a week to 10 days that way. If you have more than you can use up in that many days, then, by all means you can freeze some of the aloe vera. Small quantities, such as in ice cube trays or small plastic containers with lids that have been cleaned well, will make it easier to use when your next health crisis comes up. Certainly easier than defrosting a large frozen chunk of aloe vera that filled a margarine or yogurt tub. Once defrosted anything that is left over after a few days' use will be ready for the compost heap. You would be wiser not to try to re-freeze it.

I have not tried putting preservatives into the aloe gel for freezing yet. I've just discovered that my aloe vera plants grow bigger and better in my bedroom window, so I need to get some plants large enough for harvesting before I do more experiments of this nature.

But for the sake of those who now ask me whether you can freeze aloe vera, I answer with a cautious yes. Yes, you can freeze aloe vera for later use, but be sure to scrape the gel out of the skin first, and freeze it in small quantities so you don't have to defrost more than you can use in a few days. Do not try to refreeze, unless it is merely for an experiement to see what will happen. (Someone has to find these things out for the rest of us, right?)


An Idea for Aloe Vera Shops

Any entrepreneurs needing an idea out there? I have an idea for Aloe Vera Shops to offer you.

How about a chain of small aloe vera shops in various malls, where the store unit is set up like a small hot house for aloe vera plants? Grow them all sizes! Some on shelves with Grow-Lights, and some big ones in large pots along the perimeter walls.

Offer the aloe vera plants and cut leaves for sale, along with very informative brochures and books that explain the many benefits and uses for aloe vera. Too much stock? Well, you can freeze aloe vera, you know, so with a freezer handy, you could offer fozen aloe vera cubes or small amounts for sale as well.

If enough of these franchises can be set up we don't have to worry about trying to ship them any great distance, because they would all be grown locally, on the spot. Maybe prizes could be offered for the biggest plants grown in these shops. Other publicity events could make aloe vera VERY popular! And the general population truly informed.

On second thought, you could sell a range of aloe vera products too, for the customer who can't be bothered looking after a plant at home, and going all natural.

Get in touch with me if you have trouble envisioning the whole scenario. No doubt it can use refining, but if several people brainstorm together - we could make it work!

Site visitors' questions, particularly whether you can freeze aloe vera - and my answers - on this page: About freezing aloe vera