Stories of aloe vera uses in history can be found over a number of centuries. I'm sharing the first interesting ones I found. I'm sure more will show up if we look for them.

One of the first things I learned some years ago about aloe vera uses in history past, is that Napoleon, who was an emperor of France in the 1800s, and liked to go to war, had nothing for a field hospital to care for his wounded soldiers except a big horse-drawn wagon laden with large aloe vera plants. About the only resource his medics had to work with was aloe vera gel, fresh from a live plant.

Napoleon may not be the only general in history to do that. If you've read or studied more history, maybe you would know?

Aloe Vera uses in Many Countries

The Hindu call it the silent healer and describe it as growing in the Garden of Eden.

Chinese herbalists thought it a remedy for harmony in the body; they prescribed aloe vera juice for all kinds of rashes.

Russians talked of aloe vera being the elixir for long life.

The Native American Indians had a similar theory. They used it as an oil or ointment with power to rejuvenate.

Arab traders called it the Desert Lily, packing crushed aloe vera gel into goat-skin bags, and drying them in the sun until they had a powder they could use as they traveled by camel.

Spanish Jesuit priests took aloe vera plants with them on their exploring ventures into the New World (West Indies and North America). They always planted some on their mission properties. This spread aloe vera uses in history to places where it had not been seen before!

In fact, Christopher Columbus said, “Four vegetables are indispensable for the well being of man: Wheat, the grape, the olive, and aloe. The first nourishes him, the second raises his spirit, the third brings him harmony, and the fourth cures him.”

An island off the horn of South Africa grew plantations of aloes for trade in 500 B.C. with other countries in the orient, like India, China, and Tibet. That lasted until Aristotle talked Alexander the Great into claiming the island for himself.

The earliest doctors seem to have been Romans. Dioscorides traveled with the Roman armies and wrote a commentary in 41-68 AD of the uses he had found for aloe vera, particularly handy for boils, skin conditions, including ulcers and bleeding wounds. Also internally for gums, throat and tonsil problems. Pliny the Elder, a Roman doctor from about 23-79 AD confirmed Dioscorides' discoveries in his own writings. He added that it healed leprosy sores and could be used as an anti-perspirant.

Hippocrates started medicine as a profession. Then came, Aristotle, who talked Alexander into claiming the aloes plantation island south of South Africa. Galen followed in 131-201 AD, practicing first on the gladiators, and became the emperor's personal physician. Perhaps that's when he had time to write 100 books on herbs and what they used for medicine at that time. 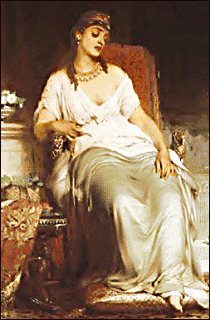 The cosmetic industry of the 19th century caught on and have been making millionaries with their creams and lotions, sprays and potions ever since. Again, I haven't done a scientific study project, but I suspect almost every brand of cosmetics carries items with aloe vera in them. In fact, this move alone has brought aloe vera front-and-centre in our own period of history. (Just look at the many brands of aloe vera capsules here).

Another of aloe vera uses in history was as a religious symbol. This is thought to be true particularly of the Mahometans of Egypt.

Sometimes they created scrolls of aloe vera to treat tuberculosis. When an Egyptian Pharaoh died, royalty and heads of state were invited to the funeral but were required to bring a pound of aloes to be able to attend that funeral. The more aloes you brought the richer you appeared to be, and the higher esteem you had for the deceased Pharaoh.

Aloe vera uses in history go back even further. The Bible makes reference to aloes. This may be from the wider genus family of plants, as some quote 200 and some up to 400 and 500 varieties of aloes. The context of the Bible verses mentioning aloes seems to imply they were used as spices. See Psalm 45:8, Proverbs 7:17, and Song of Solomon 4:14. The one verse from the New Testament that mentions aloes says it was used in embalming the body of Jesus. John 19:39 says that Nicodemus brought 75 lbs. of aloes to help Joseph of Arimithea embalm Jesus in the tomb after His cruxifixion.

The Egyptian practice of mixing aloes with myrrh - which smelled awful - was a common practice for embalming in other countries in that era. Aren't you thankful we no long continue this aloe vera use from history?

King Solomon mixed aloes with his perfumes for his clothing. Do you suppose he gave his wives and concubines some too?

In the area between the Tigris and Euphrates rivers, (now Iraq) the people used aloes to protect their homes from evil spirits. Just how we can only guess.

It would seem to me that if the rich had aloe vera in quanitites like 75 pounds, there must have been enough of a demand so that some people were growing it as a commercial crop. In that case, people would be bound to discover it's other healing properties. (This just begs more research).

The Romans and Greeks used aloe vera in the Middle Ages. A Greek physician by the name of Dioscordes, around 6 B.C. discovered how effective aloe vera was against many ailments. He prescribed it for kidney problems, constipation and severe burns. Today, 2000+ years later, many scientific studies have proved that aloe vera REALLY DOES speed up healing - including from radiation burns. Present-day dermatologists use it after doing a facial dermabrasion, which sands scars away from the skin's upper layers.

With a lack of good ways to preserve the goodness of aloe vera when travelling from country to country, it lost favour with doctors and medical people who did lab work and felt that imported aloe vera was not all they had been told. So aloe vera uses in history began to wane as doctors turned to lab-created drugs for their patients. At least in countries where aloe plants did not grow naturally year round, and as commonly as weeds.

In the 1950s, and again, in the 1970s, efforts were made to discover preservation processes, but they fell rather short of expectations. It's only now in our current generation that really good processes have been worked out and now aloe vera is on an upswing of popularity - probably already or soon to exceed all aloe vera uses in history until now!

Now it is big business to grow and extract the healing properties of aloe vera by cold-pressing methods, and even separate the aloin from the green outer portion of the leaves. Old legends from many countries, such as mashing aloe vera for a poultice to clear up arthritis, etc., are being investigated in modern labratories and new products come on the market, specially aimed at conditions like that.

Something I just learned is that aloe vera is said to be the only remedy for atomic bomb burns. The USA government bought a Texan's entire aloe vera crop to have ready gel for radiation burns in case of war situations.

I think aloe vera uses in history show we can safely use and explore more uses for the whole aloes family of plants.

Bookmark this page: (right-click on this link) aloe vera uses in history. Choose "Save Link" on popup menu - & follow instructions.