In the fall of 2014, I started a new experiment - growing aloes fromseeds. I've decided to report on the progress on this page, and add to it from time to time. (Reports are also going into my monthly ezine, Aloe Vera Tips & Solutions).

I received the seeds from strictlymedicinalseeds.com (formerly, HorizonHerbs.com) and they say to allow three weeks or more for the seeds to come up, and then to leave the tiny seedlings together for at least three months to a year before separating them out. So this will be an ongoing experiment for some time.

The instructions said to use cactus soil in clay pots with drainage. Then about a quarter inch of sand, topped with a find dusting of pumice powder. I was not able to find the later, and the attendant at Home Depot felt that the white perlite pebbles would do as a good subsitute.

In case I make mistakes and have to start over, I sowed just a few seeds of each in five small clay pots in early October. I began watering gently (nearly) every day for about a month. In three weeks I saw four tiny little shoots! 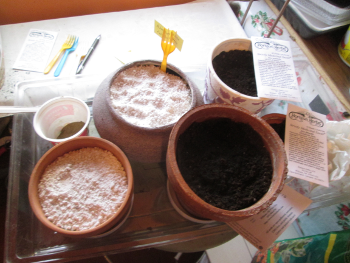 These varieties of aloes are all exotic for me, as I've never seen such plants before. I researched them online a bit to get an idea of what to anticipate. The Horizon Herbs catalogue has very helpful descriptions too. I'll share these today, and then you can better look forward to updates as these plants begin to grow. It can take around three weeks to germinate these seeds, and about three years to come to a good seedling stage, when you can separate each plant into it's own container. Obviously, this is a long-range project. 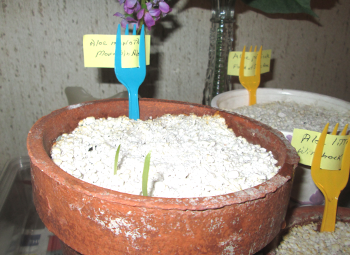 1.Aloe marlothii (Mountain Aloe) A large, single-stemmed succulent up to 15 feet tall. It's native to South Africa, Swaziland, Botswana and Mozambique. The rosette of leaves produce a candalabra of up to 30 racemes of orange, tubular inforescences (flowers). - Wow! I can hardly wait to see that! It's also a native remedy against tapeworm.

Note: this one was the first with shoots up!

2. Aloe littoralis (Windhoek Aloe) This is a large, trunk-forming succulent native to Northern South Africa, Zimbabwe, Namibia, Botswana and Angola. The weighty leaves are spotted when young, and monochrome in older plants. The leaves are grey/green with toothed reddish margins. The flowers of this aloe are coral red. Richo at HorizonHerbs.com says this is one of the most enthusiastic germinators. Okay!

Note: three of these came up in the smallest pot! 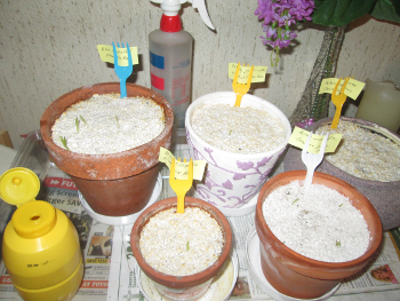 3.Aloe maculata (Soap Aloe, Zebra Aloe) A fat succulent widely distributed throughout SouthAfrica. Highly variable, so needs protection from frost. This plant has the distinction of not needing well-drained soil. It will even grow in muck. Small to medium in size, the stubby leaves often have dried tips, and are covered with 'h' shaped spots. Eventually the plant grows a stout stump, and gets branched stalked topped with flowers that look like over-sized pompoms of orange or red. - Ah, I want to see that!

Note: these were a bit slower, but there are five shoots up, and still standing! While the others disappeared.

5. Aloe castanea (Cat's Tail Aloe) A small tree Aloe that grows to 12 feet tall. Native to South Africa. The rosette of leaves gives rise to multiple, fuzzy, orange racemes (that's flowers along a stem) that curves like the tail of a cat. It blooms in winter. Hey...I look forward to that! (In the roundish mauve pot)

None of these have come up yet at all. They were sown in the roundish mauve pot.

5. Aloe petricola (Fond of Stones Aloe) A solitary, stemless Aloe native to the East Transvaal in South Africa, which gets firmly rooted between stones, yet it has smooth and succulent leaves that are rimmed by dark brown teeth. When it blooms it has bi-coloured racemes of white and orange. - That will be interesting to see!

These five Aloes are marked as new seeds for 2015. Among a total of 21. Their catalogues shows 26 varies, including our common Aloe vera. Which means that this next year they are offering 21 NEW strains of Aloe seeds for sale.

Consider yourself alerted in advance. If you wait til word really gets out - you may find they are out of seeds! Go have a look; horizonherbs.com I dare you to run your own experiment.

Six, seven weeks later, I'm growing a bit impatient, and wondering... why some tiny plants fell over and died? I hesitate to sow more aloe seeds until I know what I may have done wrong. 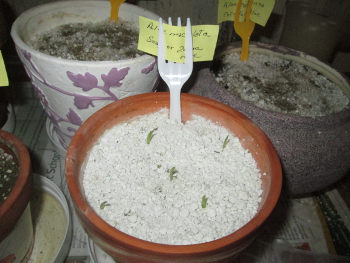 Throughout November I carefully studied my pots and little shoots and watered with dribbles from a mustard bottle. But now all the other shoots fell over and died, except the ones in the pot where the soap or zebra aloes were sown.

It has occurred to me that the perlite was a mistake, so I've spooned it away from the other 4 pots, and since it doesn't seem to bother the soap aloes, so I've left them alone.