For the last few years I've had this jumbo aloe vera plant growing in my window right in front of my computer. I've watched it grow so big and heavy it tipped the pot over to the right. Whenever I wanted another smoothee I would cut off another leaf and slice it open to scrap the gel out for my blender. But a couple of weeks ago I KNEW it was time to cut down the remaining center-stem and go exploring inside my jumbo aloe vera plant.

Would it be full of gel too? I was eager to find out.

I also knew that I would take photos of every step so that I could share this experience with others via my website. I will now do that with 21 photos! 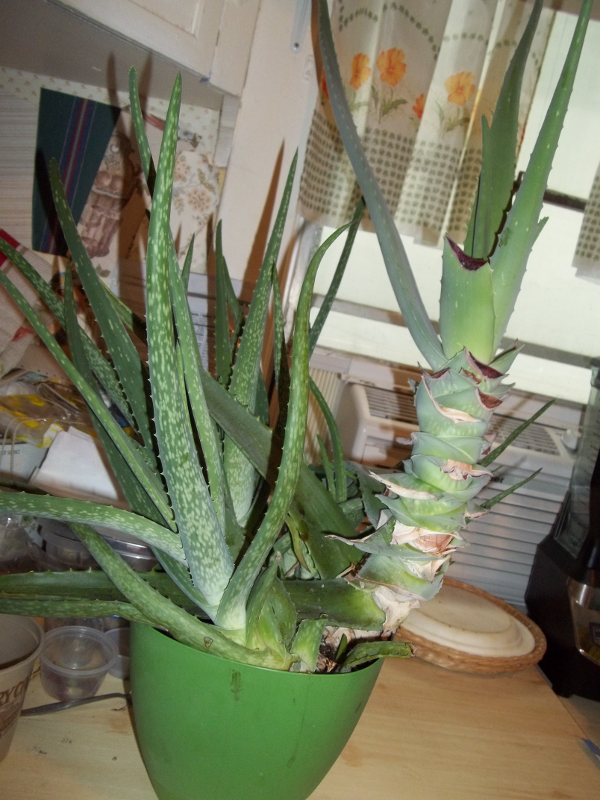 I'm talking about that thick stem on the right, with all the wound marks from the leaves I've cut off and enjoyed. The plants on the left side are child plants of this big one. 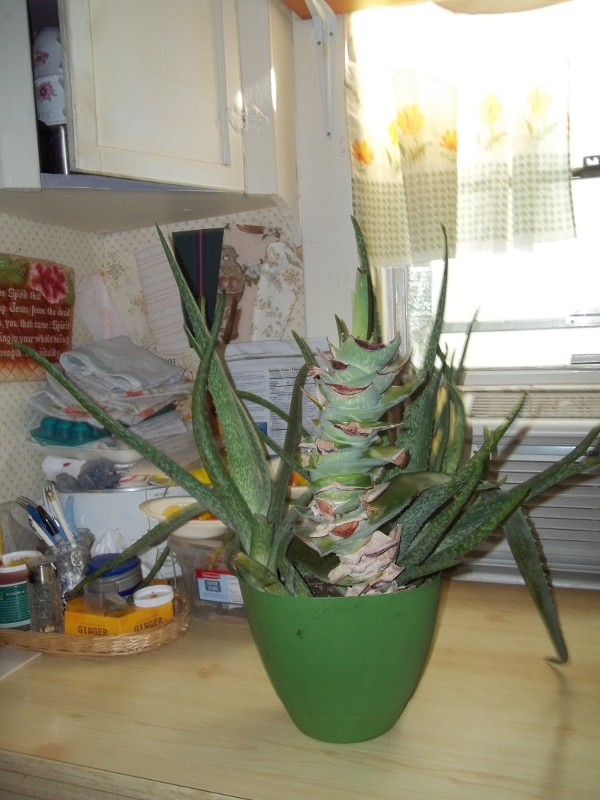 My first step was to cut off the two short little leaves pointing up from the stem. I cut them open and tried to scrap out the gel, but there were rather hard, woody corners so I could not get much from those aloe vera leaves. 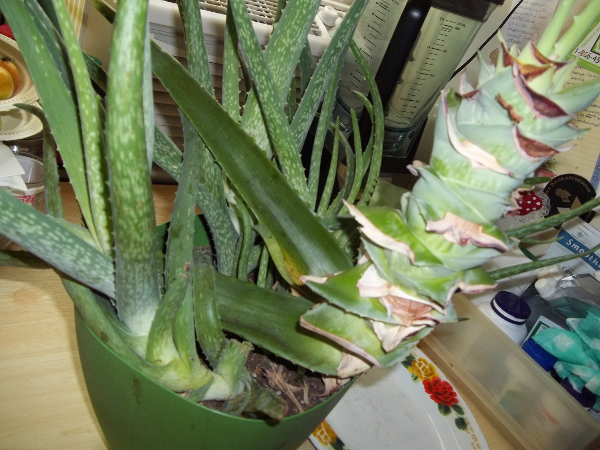 Next step was to cut away the 3 long, flat leaves that braced the stem to stand upright. 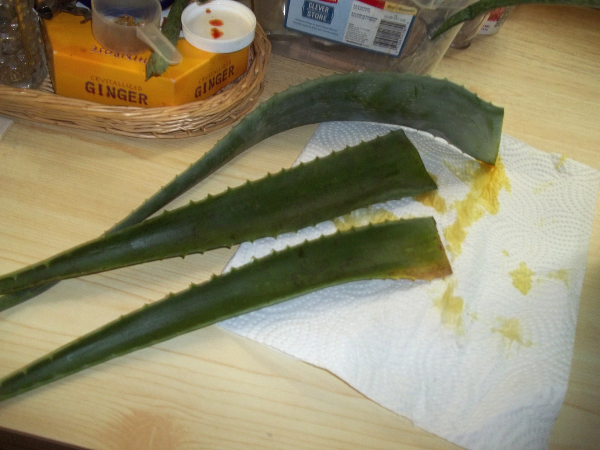 When I laid those three leaves on a paper towel, naturally they bled out the yellow ambertose (first gush of gel) which is so strong that most people will NOT take it internally. Why? Because it will purge your gut - but good! I usually let it drain out on a paper towel first. (However, I knew a woman in my hometown who chopped and blended the leaves whole, including the ambertose. Yes, she drank that! That does not appeal to me; and is not recommended by authorities.) 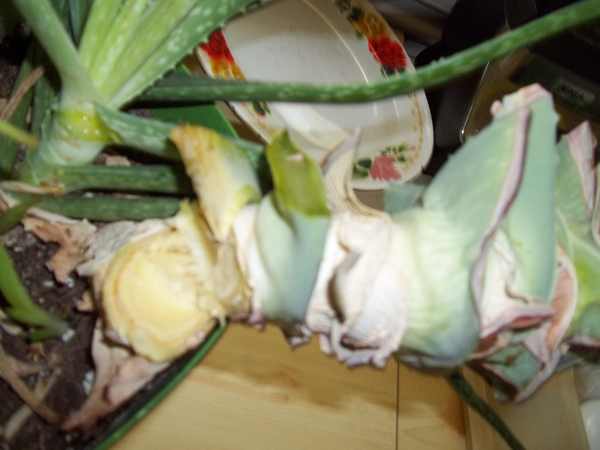 Getting Inside The Aloe Vera Stem

I had to saw away with a serated knife for quite a while on the lower part of the stem, right at the rim of the pot. Tough-tough-stuff! Eventually I was able to stop and simply break it off at the last part through. 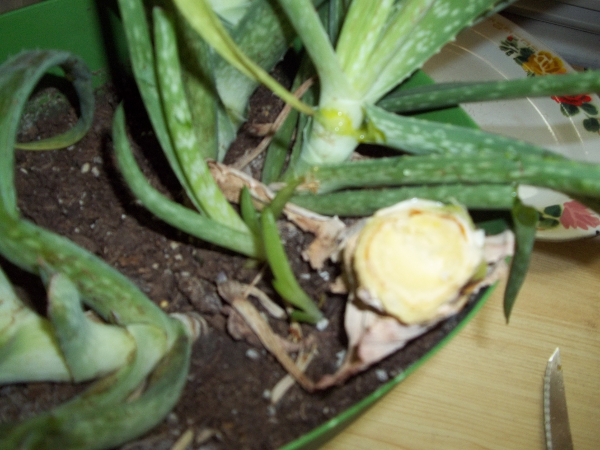 I paused to have a good look at the core of the stem. It was quite woody and HARD! I wished I could remember how old that plant was. (It thrived in my bedroom window for many years, but where did I have it before that? Can't recall). 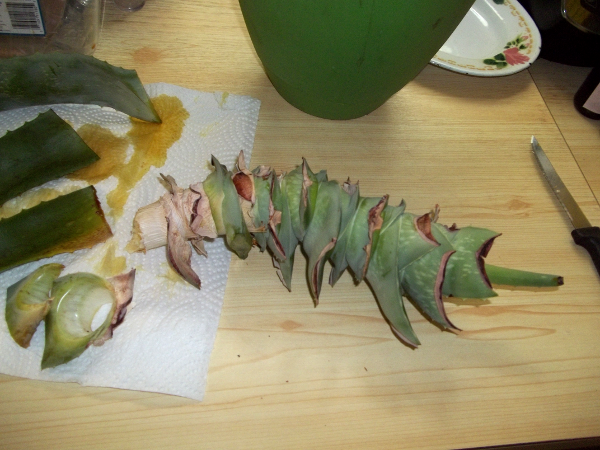 I notice too, that the leaves I have cut off for smoothees in the past were attached to the stem by rings. Now they started to fall away. Curious! 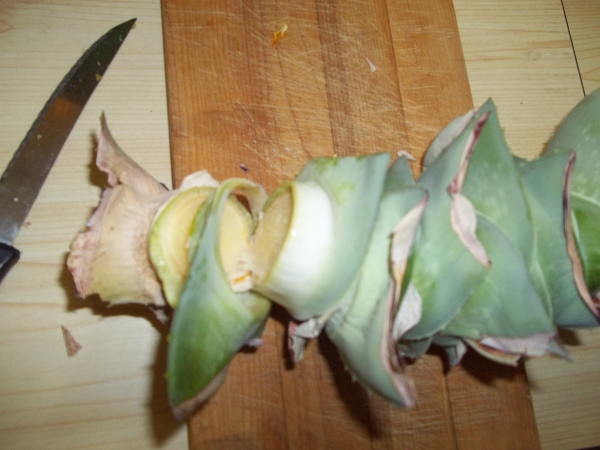 I did another cut on the stem to see if the center changed at all. Still woody and more rings are slipping off. The stem seems to have closed itself off from those wounds, so that it could carry on and survive. 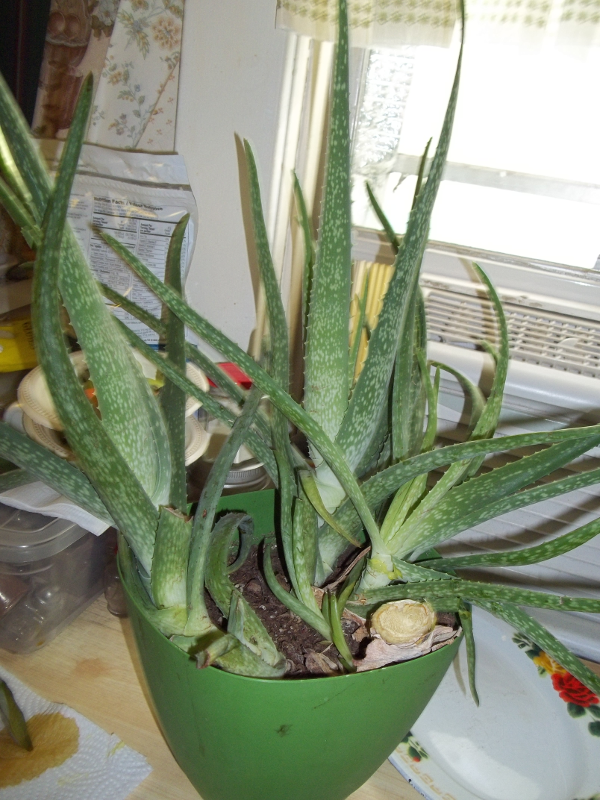 Looking back into the pot. I see I have three good-sized child aloe plants from my Jumbo aloe vera, which I will transplant soon into new pots of their own. 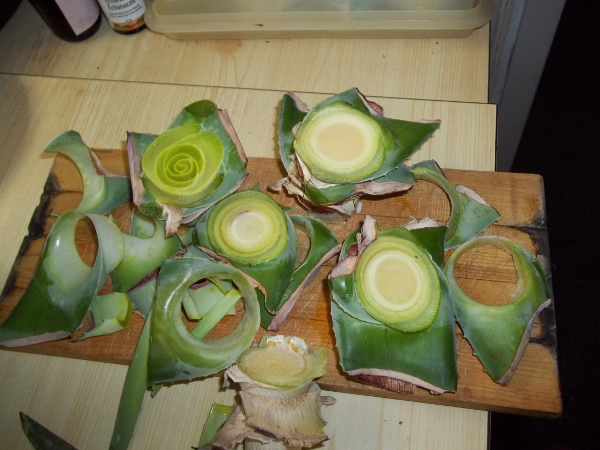 Here is a cluster of my cuttings on the cutting board. I note that the last two cuts from the top of the stem, do show some gel, but it would be hard to get it out as there is the start of new leaves starting there, and... arranged in a rosette! 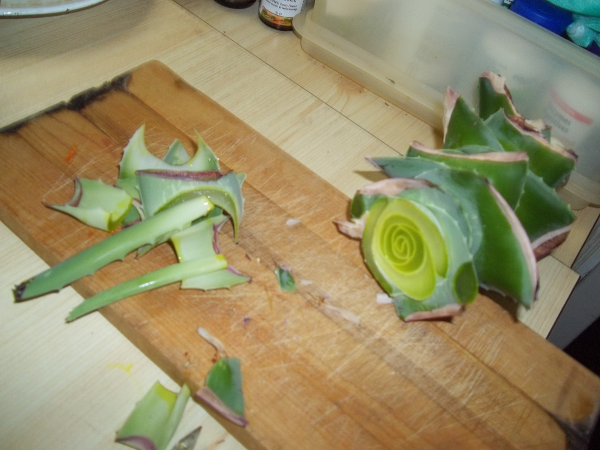 A closer look at that rosette... hmm.... that stem was prepared to keep putting out leaves! 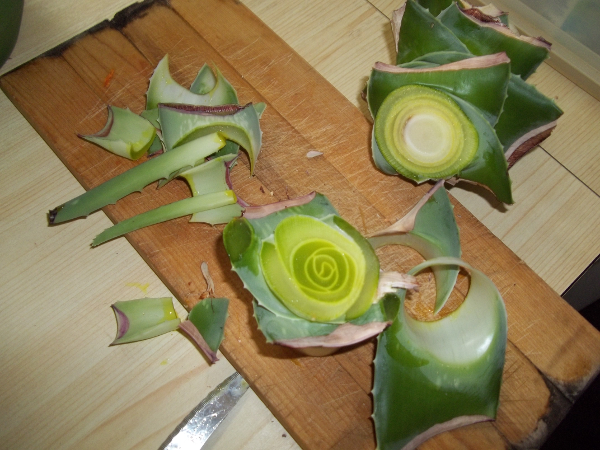 Another view to compare the cuts along the stem. (Don't know when I'll have another opportunity like this!) 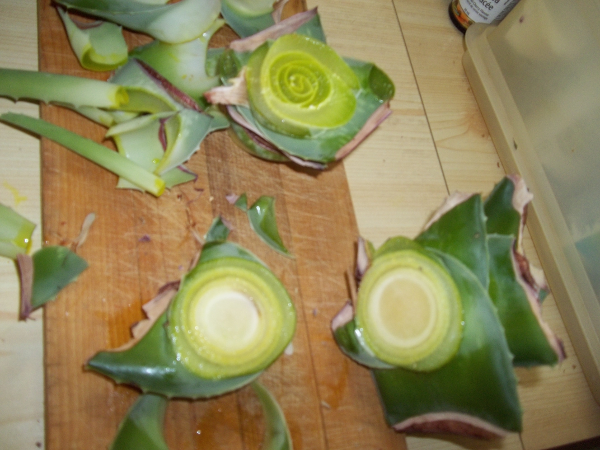 I guess I snapped several shots - for some future study of this exploration of the inside of an Aloe Vera stem. 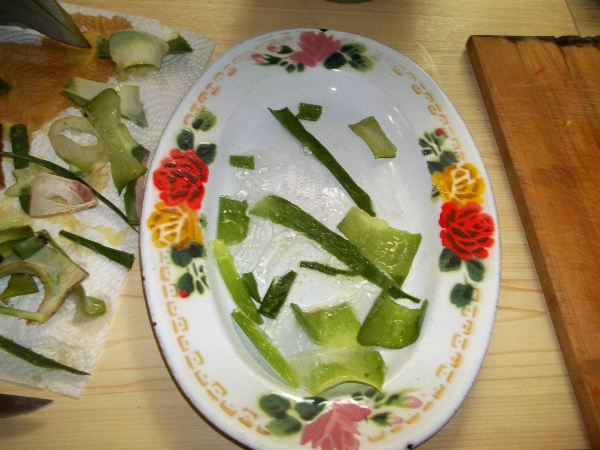 Here is what gel I could scrap out of the chunks and pieces of leaves, etc. Hey, it is much easier to get it out of a nice fat and long aloe vera leaf! 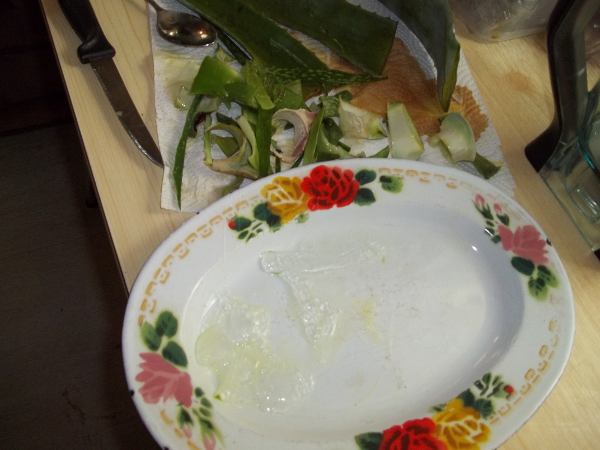 Yes, very little gel to show for my struggle to grip the slippery pieces and scratch the gel with a spoon. However, I'm going to make a smoothee. 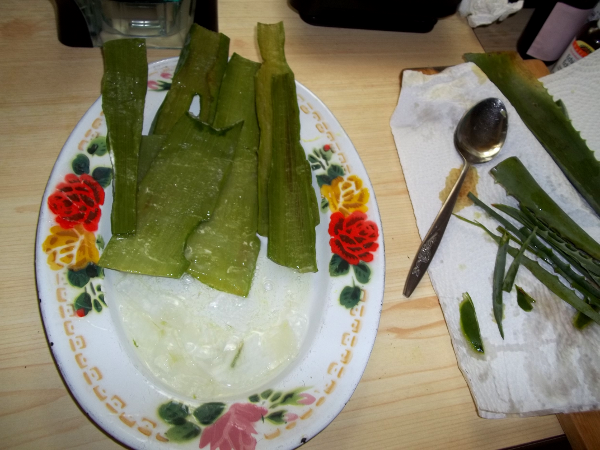 Well, I was able to get 'some' gel out of those big flat leaves, but they were not as generous as plump younger leaves would be. Definitely more fun with BIG, FAT leaves! 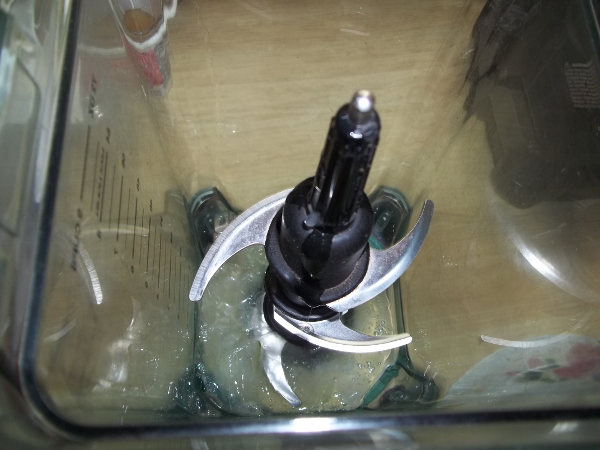 Now, I've scraped all the gel I've collected in my oval plate into the blender. I'll add other ingredients to make it worthwhile. 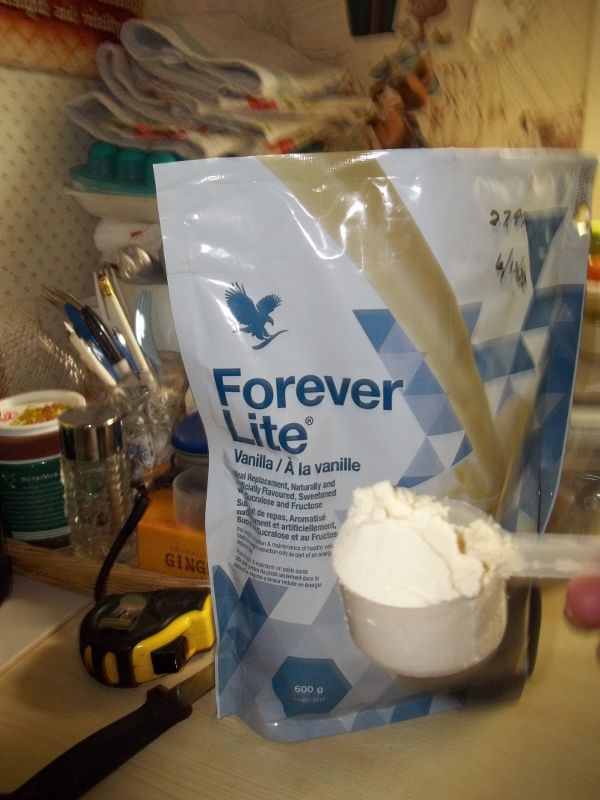 Adding a scoop of protein powder from my favourite source. This is vanilla flavoured. 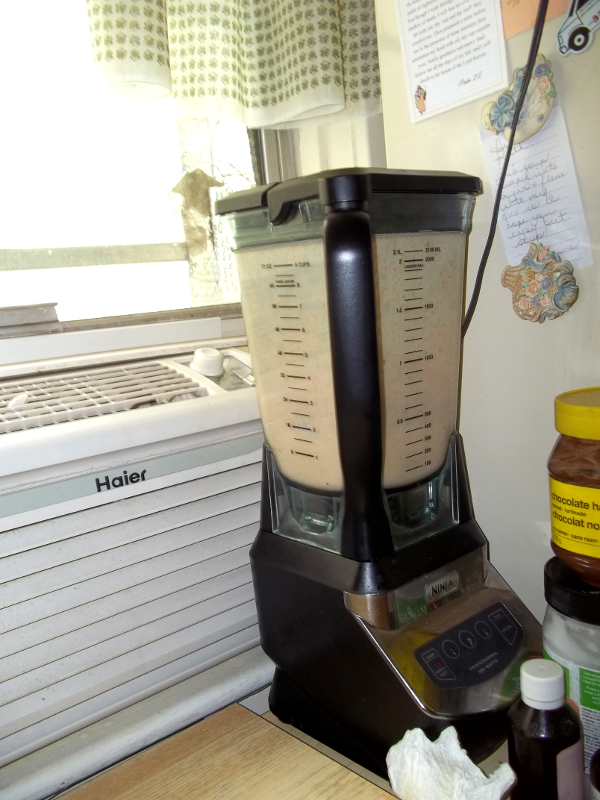 After I'd tossed in some papaya chunks found in the fridge from the day before, I set the blender to buzzing it all up. 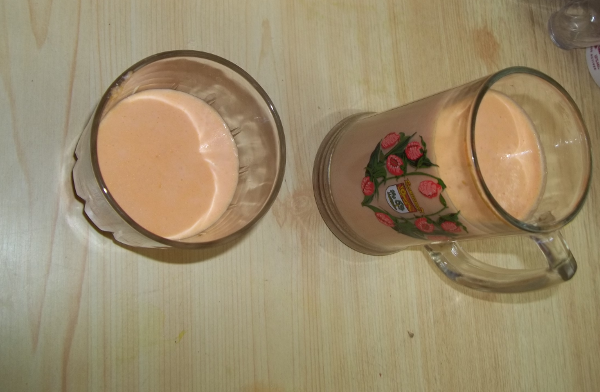 Here my smoothee is in a tall mug and the little extra in a shorter glass. The rosey colour comes from the papaya. It tasted just fine! 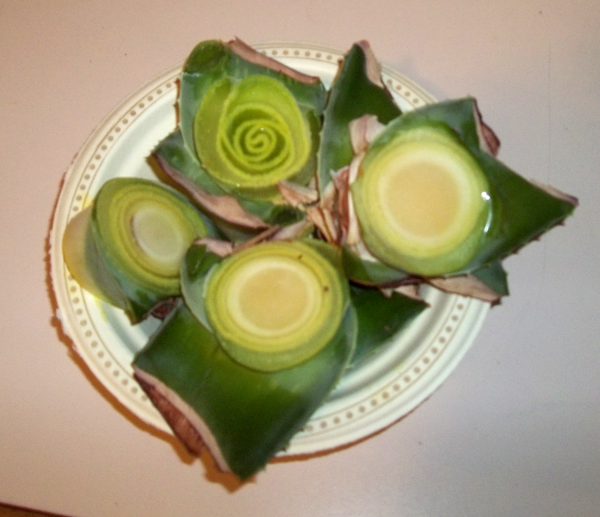 Evidence of What's Inside My Aloe Vera Plant

I arranged those stem chunks on a paper plate to have handy to show friends if/when they dropped by. - However.... before anyone came by to see them, they had turned dark and dying...looking. So these photos are my only keepsake from this great Jumbo Aloe Vera plant. Fortunately, I have taken other photos of it over the years. Maybe sometime I'll round them all up. (When someone convinces me there would be value in a book about that plant. :) )