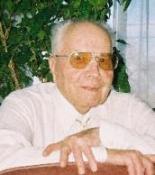 Yes, you can eat it, and be healed by aloe vera! In the ten years before he died, my Dad was healed of stomach ulcers and later of shingles, simply through eating raw aloe vera gel from my plants.

When I started this site in 2007, (after cleaning up Dad's estate), I could not find anything on the internet about eating your aloe vera plants. Now there are forums where people are asking, "Is it safe to eat your aloe vera plants?" There are also many testimonials of people who eat or drink aloe vera every day, even those who say they were healed by aloe vera.

My main early evidence is anecedotal, in the stories of what happened to my Dad, but I've since found other, more scientific evidence too, and I'm going to be adding more of that to this site as I have time.

My Dad was Healed of Ulcers 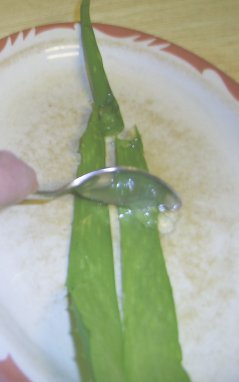 While I was the live-in caregiver for my Dad, I had from 50 to 75 pots full of aloe vera plants, and some of them were quite large. We often ate the gel from an aloe vera leaf. Dad ate them daily at times when he had a health problem. When he developed a bleeding stomach ulcer - as big as a Twoey (our Canadian $2 coin) - and the specialist wanted him to fill a prescription for a drug that would cost more than $50 every four weeks, he balked and said he could not afford that. That doctor gave him some sample packets.

I brought him home, and suggested he start eating the gel of my aloe vera leaves, not just occasionally, when we remembered, but before every meal, three times a day. Dad was willing to try this. Dad believed that he could be healed by aloe vera.

Six weeks later he went back for an ultra-sound examination, and the specialist could NOT find that ulcer. Never mind that it had been more than an inch across! Of course, Dad proudly told him he had eaten, and been healed by aloe vera - and it has cost him nothing.

Another time Dad complained to his G.P. that his chest itched in a certain spot. Our family doctor took a look and said it was shingles. He apologized that the prescription for it would be costly and he could not guarantee it would heal.

My first thought, based on stories in our small town, was that when seniors get shingles, they are stuck with it for the rest of their lives. I asked the doctor whether it would be okay to try aloe vera.

He said, "It couldn't hurt. Go for it." So we didn't bother with the prescription. We just went home, and I served Dad a small medicine cup of aloe vera gel before each meal and he smeared some on his chest at bedtime. We did this for four days, and then got busy and plumb forgot. A couple of days later I asked Dad how his shingles were doing.

Dad opened his shirt to check, and could not find the spot or even remember on which side of his chest it had been! The shingles had been healed by aloe vera!

He also had age-onset diabetes. Dad took the prescribed pills, but basically we controlled it by controlling the foods we ate, and taking aloe vere internally whenever we remembered.

(Living a healthy life with diabetes. - Living with diabetes can be a challenge. However there are ways to manage it without worry and stress. Learn how to control your diabetes effectively).

Besides that, Dad had arthritis, but it is harder to measure how much it helped. He took painkillers ocassionally as well when it bothered him, and I am not able to tell how much credit to give to aloe vera for his ability to go out for long walks, putter in the garden, and in his workshop for long hours at a time. Though I have no doubt the aloe vera helped.

He loved to tell visitors these stories, and I thought it would be smart to put this on a website, but I was busy with many things, and so it just didn't happen right away. Then, February 24, 2007, Dad died of a galloping lung cancer. I spent months on cleaning up the estate and finding myself a new home and getting it fixed up. Because it is a very small one, I had to sell or give away most of those aloe vera plants. My tiny home just doesn't have the room. I've saved a few but, oh, how nice it was to have a whole room full of big aloe vera plants back in Hague.

I can grow more, but I do wish I would have taken more photos of them!

I am going to multiply the ones I have again, and will soon run out of spaces once more! But hey, you can hardly have too many aloe vera plants! You never know when you'll have a major crisis like I did one Easter - but then I was healed by aloe vera too.

My conclusion is that you won't harm yourself by eating aloe vera gel, or drinking aloe vera juice. You need to listen to your body's symptoms, and use common sense, but the most likely outcome is - you will be healed by aloe vera!

Shhh! This is my Secret for looking much younger than I am! I just spread it over my face at bedtime - and wash my face in the morning. Want it? Go HERE! (One tube lasts for 6 mon. or more!) I have a free sample packet for you if you contact me directly.


Yes! You can drink and eat Aloe Vera!


Bookmark this page: (right-click on this link) healed by aloe vera. Choose "Save Link" on popup menu - & follow instructions.


Every first-aid kit should have some aloe vera for skin care. Order the lotions, ointments or sprays that you prefer. If in the USA (or choose your country from the drop down menu at the very top).