This summer, I've been corresponding with a visitor to this site, learning about ALVEDAMA. Peter lives with his wife on the island of Madeira, just off of Portugal. They call their business, Calhoune, and their product is registered as ALVEDAMA - Aloe Vera da Madeira (or aloe vera from Madeira). They grow aloe vera commercially, harvesting and shipping it to a company that produces their products to sell all over Europe. It has been interesting to learn how they do this. I'd like to tell you their story.

Peter and Blanka Cowen wrote;
"We have been growing and manufacturing Aloe Vera in Madeira for the past 12 years.It is good to use Aloe Vera directly from the plant in an emergency. If you use it without removing the Aloin, you will soon have a problem.

Also, the best product is made from fresh aloe vera leaves. The leaves must be harvested and within 72 hours the product should be manufactured. If not, the leaves will oxidise and the product will not be 100% good.

Our Aloe Vera gel has healed major burns, cat bite infections, cuts, piles and many fungus infections. My wife has cured shingles with the Aloe Vera Juice. We have been drinking Aloe Vera everyday for 8 years and have never visited a doctor or a chemist."

Well! I sure wanted to know more and after some questions have fleshed out more of their story, and received a number of photos too. 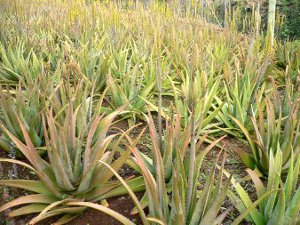 The island of Madeira, Portugal in the Atlantic ocean has the right climate and soil conditions for growing aloe vera as an agricultural crop. Since the soil is volcanic, they don't need to apply any fertilizers or chemicals. They do some manufacturing of products to sell in their country, and enjoy enthusiastic reports from people who have been healed by use of their products, sold as ALVEDAMA - Aloe Vera da Madeira.

It all began when Blanka attended a course in 2000 with Mr. Ray Henry, the retired chairman of the Aloe Vera Science Council of America. Henry had taught a method of growing and manufacturing aloe vera products, and when she returned they decided to try this. They found 100 plants growing wild in a hotel garden, and were able to obtain them and turn them over to the Madeira Botanical Research Center, where they applied propagation techniques which multiplied the 100 into 1000 fine, healthy plants. The Cowens now planted all of them on their property. 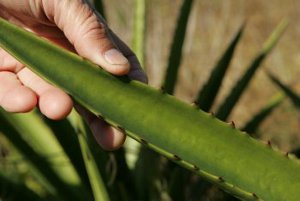 After three years they had strong, mature plants ready for harvesting and manufacturing products to sell. One had begun to flower at that time. Today - another nine years later, they have approximately 500,000 plants.

Why? How did they do that? Well, we must realize that an aloe vera plant can have as many as 10 to 15 offsets or babies in a year. And, you don't need to harvest or use up the original plant. Blanka was told that harvested aloe vera plants last from 7 to 10 years. This is a farmer's dream - crops that keep producing for a number of years! 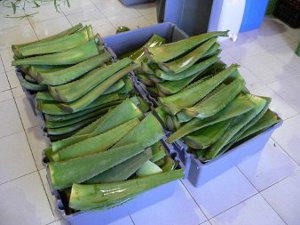 They allow the aloe vera leaves to grow to a weight of about 2 kg each when they made a 2 centimeter cut at the base asof a leaf. Then they peel the leaf from the plant. They only remove three leaves from the bottom of each plant, every three months. This keeps the plants alive. (Farmers who remove more, or more often find that the plant doesn't produce big leaves any more). Then their ALVEDAMA workers remove the aloin, the golden or amber juice just under the green skins, and hand-fillet each leaf with an instrument a bit larger than a potato peeler.

The filleted gel is liquified in a machine and sent to a cosmetic laboratory in Portuagal where the gel is put into plastic tube containers. Those tubes are made in the Czech Republic, especially designed for carrying aloe vera products. They are laminated plastic with one layer of aluminum. The finished products are shipped back to them in Madeira.

Peter sells their ALVEDAMA products from a small store.

Peter loves to tell about reports of people who found their products very beneficial. Their aloe vera gel has healed acne, cold sores, hemorrhoids, excema, and of course, burns. 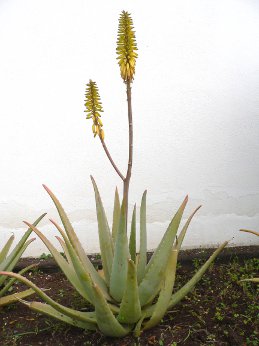 In 2000 Blanka had shingles. They made fresh aloe vera juice, which she drank, and that cleared up the shingles which have not returned. For the past eight years, they have both been drinking their aloe vera juice daily, and have not had to see a doctor or a pharmacist once in all that time!

One Portuguese worker feel from three meters, down onto three steel spikes which went right through his shin on his left leg. Doctors treated him for six months, and his leg would not heal. They were threatening to amputate the man's leg. Then Peter and Blanka gave him their ALVEDAMA gel and within six weeks the man's leg was healed and saved. Recently that man went on the local television to tell what aloe vera had done for him. 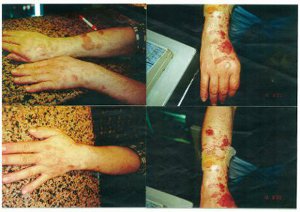 These four photos are of a barman who dropped water in cooking oil. (Ouch! Scalding hot oil burns!) The first was taken on the same day as his accident, and the other three over three months until he was completely healed by their ALVEDAMA aloe vera gel.

Peter's personal stories go like this; in 1980 he began to suffer from gout and high citric acid in his blood. For 20 years he had to take a gout pill every day or his left foot and knee would swell up and cause tremendous pain. But ever since he took to drinking aloe vera juice each day he has not had to take a single more gout pill.

About eight years ago, his wife noticed that he was losing a lot of hair on his pillow each night. Since his father was bald, and his brother, 17 years younger than himself, was bald, Peter decided to find a cure for this problem. 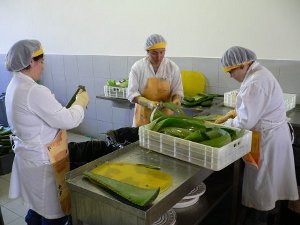 First he determined how much hair he was losing. By placing a trap in the shower drain he was able to collect and count his shed hair. Over eight days he averaged a loss of 30 to 40 hairs each day.

Then he created a hair cream he called Creme Para Cabelos. It is made from 50% Madeira aloe vera and extract of garlic, extract of onion, extract of coconut oil, extract of sunflower, plus a number of plants recommended by old local Portuguese Madeira folk. Peter has used this product personally every day since, and he no longer loses hair. Rather, his hair has grown!

However, people don't want to believe this last claim, so they don't market it as a hair growth product. They sell it instead as a hair tonic to prevent hair fallout.

WINKS, a company in Portugal did some trials and are now selling this ALVEDAMA product under their own brand name to regrow eyebrows.

Dr. Rudi Reys Bvda, a hair surgeon in Belgium had a problem with hair not growing in a surgical wound after a transplant, so Peter and Blanka developed a fine aloe vera spray which the doctor now uses after completing his surgeries. He claims that he has great success with the product, and also gives his clients their ALVEDAMA hair cream tonic.

They get reports too, from local teenagers in Madeira, that aloe vera is great stuff for clearing up acne and cold sores. 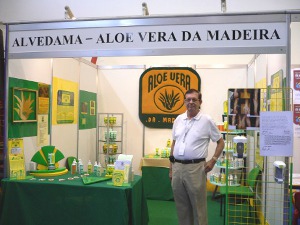 In this photo, Peter is at their stand at an EXPO in Madeira. (Now they have a website of their own; ALVEDAMA)

You can also find their products for sale online at www.Madeira-Shopping-.com/aloe_vera_products/.

I must say, I'm impressed with what Peter and Blanka have done. May God bless them with their ALVEDAMA business.

Every first-aid kit should have some aloe vera for skin care. Order the lotions, ointments or sprays that you prefer. Find these in the Forever Living Store

I can tell you where to find high quality aloe vera cosmetics!