What Ragweed is, Really

Ragweed is an herb in fact, but it is seen mostly as the villain weed that causes hay fever across most of North America and down into northern Mexico in the fall. It only lasts one season, but it releases about 1 billion pollen grains in that one season. So it gets a lot of hate even from sufferers who have no idea what ragweed looks like. 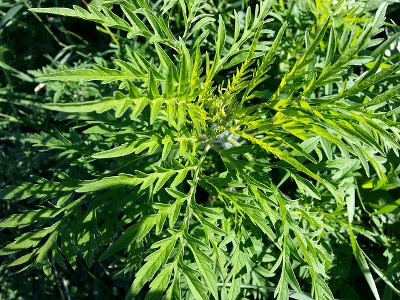 Ragweed is from the genus Ambrosia, and from the Astericaceae family of 23,000 species. This means that if you get hay fever from ragweed, you also need to watch out for chamomile, daisies, and artichokes too.

The leaf of the common ragweed plant is made up of multiple leaflets that have a fern-like appearance. The leaflets are essentially miniature versions of the whole leaf. Such leaves are sometimes referred to as "twice compound," meaning compound leaves that are made up of separate leaflets, which themselves are compound. 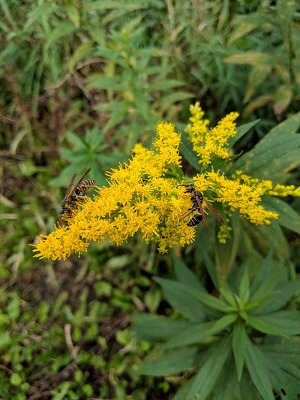 Another identifying feature on the common ragweed plant appears with its initial leaves, those that first come out after a seed germinates. These typically have some purple speckling on them. Note, however, that other weeds can display an admixture of purple, so don't jump to any conclusions. Lamb's quarters (Chenopodium album), for example, another rather nondescript weed is often found with some purple in its leaves.

There is a species of ragweed, that grows quite tall, known as goldenrod. It often gets the most hate for allergy attacks, however, the guilty culprit is a more lowly member of the ragweed clan, with rather toothy leaves that grows in grassy fields or ditches. That is the plant that gives off about one billion pollen grains in a single season.

My Earliest Experience with Ragweed

I lived and worked in London, Ontario, (Canada) for just about 12 years, from 1971 to 1983). Most of those years I was a receptionist and switchboard operator at Philips Electronics - their light bulb factory. Beside this building was a strip of land the city had allocated for a road allowance, but no road went through there during those years. It was a strip rife with weeds, mostly ragweed. About mid-August I would start to have severe allergy attacks, and always worse during my work hours at my job. This would continue until the first hard frost over night in mid-to-late-September.

The first day this happened, the secretary of the General Manager came by my desk and was aghast to see my face. I ran to the washroom to see what she was seeing. The skin under my eyes had ballooned and looked like pink bubbles filled with fluid! She put me in a cab and sent me to a doctor in my area of residence.

This young doctor pulled a book off his shelf to see what to do, then gave me a cortizone shot, and told me to lay low for the weekend. I also got a referral to an allergy specialist some days later, and was tested and discovered to have nine allergies, including alcohol, (though I don't drink!) peanuts, sugar, processed foods, wheat, chocolate, nuts and coffee. I tried to avoid sugar, chocolate, and coffee, but mostly I worried about the ragweed.

My landlady loaned me her book, "Let's Get Well" by Adelle Davis. Through that book I learned about the importance of vitamins and minerals to build up my immune system so that my body could fight off these allergies. (I see that her book is now selling for high prices on ebay, which means it is rare to find a copy for sale. However, I've just discovered the Adelle Davis Foundation website which seems to have a lot of her information for free there, including recipes, and remedies!

I did get some antihistamines too, but soon found that they made me dopey enough so that I wasn't so safe driving to work in the mornings, so I began to study up and use supplements and other natural remedies as my main approach.

After several years of this misery with sinus headaches, itchy eyes, and drippy nose, someone informed me that if I called City Hall, and asked them, they would send someone out to mow that strip of land, but I should call before the pollen had fully formed. I started doing that early in August, and sure enough those particular years my allergy or hay fever symptoms were greatly reduced.

If your health and nutrition is poor, you are likely to get other allergies too. So don't resign yourself to just swallowing antihistamines and painkillers, as they will give you other problems. Perhaps even an addiction; at the minimum, they help you less all the time.

Please note, that ragweed can give you other types of allergies, not just in your sinuses and throbbing head. Ragweed may also give you asthma, and skin conditions, such as hives, and scaled and itchy dermatitis patches. You may also feel super fatigued; like something the cat dragged in. As your immune system weakens you might find that you develop allergies to some foods too. Your body will see the allergens as a foreign invader and will try to send a natural histamine through your blood to fight off the causes. But if you are super weak to begin with, the chemicals from the allergens may get the upper hand and trigger the new allergies, to even good things like protein, which your body wants and needs.

Then you have a vicious cycle. You feel like screaming for this ferris wheel to stop. You want off!

I'm sorry. Things are going to sound worse before I get to the good news.

The common ragweed is rather short, and is easily hidden in grasses, unless in rich, healthy soil. You will recognize it by the fern-like leaves, and that the leaves that come out after the plant is fertilized will have purple spots on them. Also, it has both the male and female flowers on the same plant. Only the female flowers tend to hide under the joints of the leaves. The flowers give way to a brownish fruit called an achene, but it too, is harder to find.

However, this common ragweed plant is nothing compared to it's big brother, the giant ragweed. Wait a second. They have two things in common. the same kind of flower spikes, and secondly, that brushing against the plant with a bare leg or arm will likely give you a rash.

The giant ragweed is different in that it has a "palmate" leaf. That is, it's shape is like the palm of your hand. Closer looking will show that some have five segments, and some have only three segments. Mainly though, the large size should help you identify it.

The University of Tulsa, OK., has found that there are 21 species of ragweed in the Ambrosia family in North America; the common ragweed, and the giant are only two of them. One kind is found in the deserts. It seems that any ragweed could cause allergies, so give them a wide berth wherever you find them.

Now, for some answers! Go here for the article with the 8 Natural Remedies for Hay Fever.

I have a few Neuro-vax patches by VoxxLife; I'll give you one as a FREE sample; if you want to try it out. Just get in touch with me personally. IF you know you want to buy a package of them go to: VoxxLife.com/shop/ and check out lots of Wearable Tech! (The Neuro patches boost your immunity).