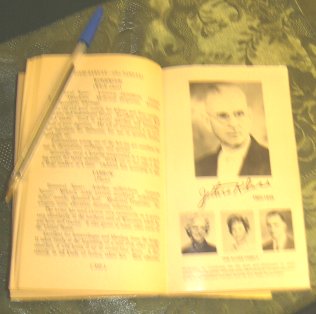 by Jethro Kloss was recommended to me by an elderly woman in a nursing home when I was visiting my grandmother there. We were talking about herbs under our feet, seen only as weeds. Because of that older woman's reference, I went looking for this book, Back to Eden and found the authorized family edition of his classic book in a health food store.

The more I read in it the more enthused I became. Jethro Kloss, though he was born April 27, 1863, (before my beloved Grosz'mama in 1896, making him about 85 years older than me), showed a lot of wisdom and knowledge. I was impressed. I began to try out the herbal remedies he suggested, and discovering they helped!

In this book, his daughter Promise tells about her father's life and gives a biography, and in the next preface, Jethro himself tells how he came into this lifestyle.

Promise Kloss Moffett describes how her father was born the ninth in a pioneering family of eleven children. The family lived a healthy, wholesome life in the midst of native Indian country. They gathered their food and medicines from the land around them, just as the Indians did, though of course, they farmed too. They were a devote Christian family (later I learned they were Seventh Day Adventists), and as a young man, Jethro headed to Florida to work in the orange groves, and later on to Nebraska to get an education at Deland. From there he went on to Battle Creek in Michigan.

It was in Battle Creek, that Jethro Koss worked in the world-famous sanitarium. He learned much about the dangers of drugs, and how to care for the sick. By this time he was a licensed minister. It was also there that he met and married Miss Carrie Stilson. Carrie had trained as a Bible worker and had taught school. They were married on March 5, 1900.

In my research, I've discovered that Battle Creek was a very Adventist area. Many moved to that area. Ellen G. White, their prophetess sent young men to go get medical training to give some of her better health ideas credence. One of them was John Harvey Kellogg, who set up the sanitarium and even invented that name. It became an important center, and many famous people came to get treated in that facility. Dr. Kellogg and his younger brother Will discovered the making of corn flakes by accident, while trying to provide patients with good breakfast foods. Will became the manager and then the owner of the large and successful Kellogg's company. At one time there were 40 such breakfast companies in Battle Creek, all competing vigorously for the best market share.

Jethro Kloss knew and admired Dr. John Kellogg, and taught many of the same views on healing virtually every ailment with herbs. Though some folks found them odd, maybe even fanatic, these men sincerely wanted to help others get well, and live well.

They settled in Rose Lawn, Wisconsin, where he worked as a minister and also ran a branch of the Battle Creek Sanitarium on the side, plus sold some health foods. Two children were born to them there, Promise Joy and Paul. However, baby Paul died of whooping cough when only four weeks old. Carrie died in July 1905.

Two years later, Jethro Kloss married Mrs. Amy Pontwith, a widow with a little girl, Mabel. They moved to St. Peter, Minnesota, and started up an attractive sanitarium in pleasant surroundings, which they called Home Sanitarium.

It was run much as a small hospital would be nowadays. (Back in the early 1900s there were not many hospitals yet). They had mens' and womens' wards, and private rooms too. The local doctors would perform surgeries there, with Jethro handling the anesthetics. They were equipped for electrical treatments and hydrotherapy, and were especially successful in treating nervous breakdowns.

In 1911, after selling that sanitarium, the Jethro Kloss family moved to Fountain Head, Tennessee, bought a farm, built a house and barn, and began to raise all kinds of fruit and vegetables - and Shetland ponies. Their last child, Naomi, was born there in 1913.

But then Jethro Kloss received an invitation to come to Amqui, Tennessee, and take over a food factory. He rose early and worked, long, hard days at this challenge. He was an excellent baker, and the place did so well that he was shipping food all over the United States and into Canada. Here he developed many of his famous recipes. (Later on this place became part of Madison College near Nashville).

Jethro next went to Brooke, Virginia, and set up a new health food factory and a retail market. All of his family were pressed into service to help this business succeed.

In fact, Jethro was a firm but gentle family leader. He regularly gathered them all together for hymn-singing, and to read the Bible and pray together. He was a strong disciplinarian, but also warm-hearted and affectionate. If he had to go away, he wrote to his children every day. He delighted in slipping them an extra little gift of a new fruit or whatever. He liked to have his children read to him, to save his eyes, for the long days he worked.

When his step-daughter, Mabel and her husband, were able to take over that business, Jethro moved his family on to Washington, D.C. There he lectured on health, and continued to treat the sick, and he studied herbs and their preparation in greater depth. He began to get more and more requests to lecture all over the country and began to travel more on these speaking engagements. In his spare moments, he was also beginning to work on his masterpiece book, Back to Eden. Where ever he went, when people asked him for help, he stopped to counsel or give treatments to heal them, always using his herbs or very practical methods.

Finally, in 1939, he was able to complete and publish the book, Back To Eden

In 1945 he met Mr. and Mrs. Deloe Robert Hiatt. Together they bought a property at Coalmont, Tennessee. The Hiatts took over the promotion and publication of his book, Back to Eden, so he could concentrate on treating sick people, and teaching his health principles. He hoped to start another sanitarium, but his health was failing by that time.

His daughter Promise writes that he was like a candle that had been burned at both ends. He was worn out. But when she called him from northern British Columbia in Canada, where she lived, just before he died, he was still full of visions and ready to build that sanitarium he had in mind. He thought that would be his greatest legacy for future generations, never realizing that he had already accomplished that with Back To Eden

Jethro Kloss -
Remembered by his Granddaughter

His granddaughter, Doris Kloss Gardiner, remembered her grandpa fondly for his friendliness and playfulness first of all.

She observed his strict adherence to his health rules too. One was to go outside early every morning to do a certain number of jumping jack exercises. The brisker the air, the better he liked it. When he came in he drank a glass of fresh orange or grapefruit juice and waited exactly half an hour before eating his breakfast. Another rule was to never eat between meals.

One rule she didn't like was the cold water rub-down first thing when she tumbled out of bed. It ensured an alert, running start to her day at any rate.

She did love her grandpa's herbal cough syrup, and would sometimes muster a cough just to get another swig.

Doris' grandpa loved foot massages, and since the children (Doris had nine cousins) preferred to go outside to play, he would bribe them by offering them a nickel for a ten-minute foot rub. Because she liked to buy penny-candy, she could be persuaded to comply.

As she grew older, she was recruited for other duties such as filling gelatin capsules with powdered herbs for her grandpa, or to stand by a kettle and stir the soybean milk so it wouldn't burn. However, she found the soybean milk delicious, and also enjoyed his many other soybean products, such as meat substitutes, breads, butter, cheeses, and ice cream.

She learned to admire and respect her beloved grandpa for the way he disciplined his body and mind to keep well, and to experiment and develop food products for the benefit of others.

When Jethro Kloss, her grandpa, was going to give a lecture or cooking demonstration, he would often prepare soybean ice cream ahead of time to serve to the public. Doris loved to help so she could lick the ice cream paddles before they left to go to the lecture. Not only did he win her quiet attentiveness during his speaking, he won many loyal followers from the taste of the ice cream afterwards.

In his foreword to his book, Back To Eden

Jethro Kloss sums up his life's purpose;
I wish to bring to the notice of the general public the untold blessings which our Heavenly Father has provided for all the world. It can be truly said, "My people are destroyed for lack of knowledge." Hosea 4:6. A lack of knowledge based on truth is accountable for much of the untold sufferings and miseries of humanity.

He also said in the same foreword, "God has provided a remedy for every disease that might afflict us. Satan cannot afflict anyone with any disease for which God has not provided a remedy. Our Creator fore-saw the wretched condition of mankind in these days, and made provision in Nature for all the ills of man.

I fully believe this to be true even today, in the twenty-first century. But I see that it is time to start a new web page on the teachings of Jethro Kloss, as I find them in his book, Back to Eden.

Another good profile of Jethro Kloss is found on the SoyInfoCenter.com site.

Aloe Propolis Creme combines pure inner-leaf aloe vera gel and bee propolis. Vitamins A, E and C work to nourish and moisturize the skin while propolis helps rejuvenate skin for a smoother, suppler look and feel. You ought to try it. Get it at my Forever Store.

Okay, you don't have to make your own ointments like Jethro Kloss did. Instead, order the Forever Living lotions, ointments or sprays that you prefer. If in the The Forever Online Store.