I decided to research the My Miracle Tea ingredients after I'd finished my first sample order, and was debating with myself whether my own dried herbal teas could do me just as much good and save me the bother of ordering this new (to me) remedy.

I made some surprising discoveries.

One site no longer in existance, sold a very similar recipe, giving credit to the same creator, Dr. Miller. It described malva leaves as being excellent at soothing irritated tissue, relieving inflammation. It even counters the inflammation of mucus membranes, and lowers stomach acid, "and relieves gastrointestinal disorders, such as gastric catarrh, enteritis, indigestion, ulcers and colitis."

Well, that's pretty wonderful! Sounds as good or better than my calendula flowers and comfrey in my garden. (In fact, I've sown some malva flowers in my garden one spring, but too few even if I do find the rest of the My Miracle Tea ingredients).

Wait, there's more. Malva leaves can loosen and expel phlegm-congestion from the lungs. (Got pneumonia?) It can also drive off excess fluid and mucus. It sooths the larynx and tonsils, dry coughs, sore throats, hoarseness, lung catarrh.

Then it should be terrific for conditions such as bronchitis, asthma, emphysema and everything to do with our respiratory passages. Why haven't I heard of this miracle plant before? Now I'm really glad I checked into the My Miracle Tea ingredients.

Reading further, I see that malva leaves are a naturally-mild laxative if they are taken in larger doses. Especially when used together with the mashmallow leaves, you get a diuretic effect - meaning, you drive off excess fluid and sooth the urinary tract when you have cystitis or bladder infections.

I was rather surprised not to find all these My Miracle Tea ingredients in Jethro Kloss' "Back to Eden" book, but perhaps he knew them by other names. So I looked on Wiki and discover that malva is a genus of about 25-30 herbs/plants that are biannuals and perennials. (Aside: the French word for the colour mauve comes from this plant's flowers). Then I see it is, "a closely related genera in the family to bear the common English name mallow. The genus is widespread throughout the temperate, subtropical and tropical regions of Africa, Asia and Europe."

So I look up Marshmallow in "Back to Eden" and discover that it's common names are: Althaea, sweet weed, wymote, and mortification root. Kloss went on to describe some of the very characteristics we just saw above for Malva leaves. So if Malva and Mallow are not siblings, they are kissing cousins in the plant world. 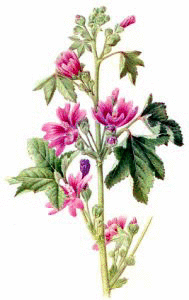 "Back to Eden" my favourite 'old' reference book - talks about this plant as being great for poultices on sores or inflamed parts. It's very soothing and lubricating for lung troubles, hoarseness, catarrh (that's the awful phlegm at the back of your throat, by the way), diarrhea, dysentry. (For the latter you simmer a teaspoon ful in a cup of water for 10 minutes, and cool, and drink two cups a day, taking a large mouth full at a time). Mallow can be used as a douche for sore, inflammed eyes, and also for irritation of the vagina. Very healing for inflammed bowels too! Great for pneumonia and kidney stones as well.

(Hmm! I must remember that! These My Miracle Tea ingredients are impressive.)

Do you pick up that we're talking herbs here, right? This mashmallow is not the soft white ball or cube of sticky sweetness that you put on a stick at a weiner roast and toast just enough so you can make a delicious treat to pop in your mouth.

So what makes Holy Thistle so holy? I remember how Dad used to hate all thistles when he came upon them in the garden. He usually called them Russian thistles, though I think they had been Canadian for quite a few generations.

Jethro Kloss knew and loved this plant! He said its other botanical name is Centaura benedicta, and it's common names are; bitter thistle, blessed cardus, spotted thistle. He agrees with Live Source Herbal Tea, which declares this to have great powers to purify the blood, and aid in circulation thereof. It strengthens the heart and is good for the liver, lungs, and kidneys. It sooths the brain and improves memory.

Oh my! I don't know what to make of the next bit - it's suppose to be good for insanity?! (Maybe I better restrain my enthusiasm until I see that proved).

Two cups of blessed thistle tea will cure chronic headaches. (Where's the testimonials for that?) If true, we shouldn't keep this a secret. Nor these My Miracle Tea ingredients!

It's suppose to be good for girls entering puberty and having menstral problems. Plus, if given to new mothers holy thistle will increase their flow of milk.

This plant has been around for centuries and is well-known for it's medicinal qualities. Kloss says to make a tea of Holy Thistle (assuming you can get your hands, or gloves, on some), is to simmer two ounces of the dried plant in a quart of water for two hours. It's best to drink this tea at bedtime as it will make you perspire. (Oh, will it warm cold feet? I must try it!). Kloss liked to combine it with red dock, yellow dock, or burdock.

Is Blessed Thistle different from Holy Thistle? The "Back to Eden" index refers me back to Holy Thistle. The description on lifesourceherbaltea.com (which doesn't exist any more), was similar but had some slight differences. It added traits like, the stimulation of digestion, strengthening nerves, stimulating metabolism, an antiseptic, antibotic, anti-viral, a heartburn remedy, reduces flatulence (gas), and a stimulent for liver and ovaries. It's an exporctorant, heals wounds, stimulates transpiration, and appetite, and it indues the flow of mother's milk.

What are these? I've never seen them. This tree, and its fruit do not show up in "Back to Eden," so I really had to read widely on the internet to collect a profile or sketch of this helpful tree's leaves.

Persimmon leaves contain a natural compound that binds itself to fat. That helps it to eliminate fat from the body! (Ah-ah!) Further research shows that this will inhibit weight gain, and it lowers food intake, as well as one's plasma lipid levels. Scientific tests show that the rich fibre and phenolic stuff in persimmon leaves takes more lipids from the body as waste. Do you know what that means? Do you really need three guesses? If you need to lose weight, you are probably drooling over these My Miracle Tea ingredients.

A number of sites refer to the Chinese Academy of Sciences' finding that persimmon tea has a variety of Vitamin C, tannins, flavoinoids, rutin, choline carotenoids, and amino acids. What's more, this tea (straight persimmon tea) has no less than 10 healthy elements such as Magnesium, manganes, titanium, calcium and phosphorous, for starters.

The Chinese have grown persimmons for thousands of years, so it's obvious that they know this plant and the fruit well. In fact, they have developed several varieties, and the juicy orange fruit has the nickname, "Emperor's Tribute." They call the persimmon seedings, Persimmon Ye, and these are much sought after because they are known to be a food that heals.

Sure enough, a Korean study said that persimmon tea has 3.5 to 20.8 times more vitamin C than Green Tea does! (And we thought Green tea was special, didn't we?) In Japan, their magazine, Longevity, says persimmon leaf tea can prevent melanoma. It even generates anti-cancer and anti-influenza virus interferons. Hmmm, our western countries need to get acquainted with persimmon!

With these key herbals as the My Miracle Tea ingredients, I'm fast gaining greater respect for this product. In fact, I recently had an experience with the Miracle Tea that showed me to treat it with respect and not to think of it as something to gulp down instead of water. When my second order arrived I made a one quart jar quantity according to the instructions, and decided to have a mug full right away. About four hours later, at my midnight bedtime I decided that it tasted pretty good; why not have another quarter cup without diluting it. Didn't the instruction sheet say you could have up to two cups (diluted of course) a day?

Well, I had to rush to the bathroom when I woke at 6 am. Then several more times in quick succession. My stomach definitely felt empty but there was a blockage in the lower bowel and the more I struggled to pass it, the more the pressure and pain built up.

A friend arrived at 9 to help me put everything back into a room that had been renovated. But by 10 I was still stuck in the bathroom, in more distress than I could remember ever having before. Finally, I grabbed the phone over my head, and called 911. An ambulance was soon there, and trundled me off to Emergency. There I was able to pass the small blockage in a matter of minutes, and after that a lot of gas which had built up. Once that was gone I was okay, but was observed for a while longer, and then discharged.

Now I stick to just one cup a day, and make sure it is only a quarter cup of the tea infusion, and the rest of the cup is water added to dilute it. That works fine for me!

Are you wondering if you could try it too? Sure thing!

Try Nature's Easy Detox Tea TODAY! Why re-invent a combination that works? Especially now that you know about the My Miracle Tea ingredients.

Interested - but not Sure about Aloe Heat Lotion? If in Saskatoon, contact me directly; I'll give you a sample packet to try it out.

Bookmark this page:(right-click on this link) My Miracle Tea Ingredients. Choose "Save Link" on popup menu - & follow instructions.